Okoa Mombasa today urged President William Ruto to immediately rescind – in writing – two government directives that require cargo at the Port of Mombasa to be transported exclusively via the Standard Gauge Railway (SGR).

President Ruto declared soon after his inauguration as the 5th president of Kenya that all port services would return to Mombasa, but Mombasa residents are yet to see concrete actions to fulfill this promise. Cargo is still being forced onto the SGR, and the Kenya Ports Authority (KPA), is not allowing shipping lines to use Mombasa as their customs clearing point.

“President Ruto’s pledge to return all port services to Mombasa is laudable, but so far we only have words – nothing has changed on the ground,” said Khelef Khalifa of Muslims for Human Rights, an Okoa Mombasa member.

“The SGR cargo directives need to be revoked in writing and KPA needs to issue a written communication allowing customs clearance in Mombasa. Until both of these happen, we cannot say that port services have returned to Mombasa,” Khalifa added.

President Uhuru Kenyatta issued the SGR cargo directives in 2019 to create more business for the cash-hemorrhaging SGR. The directives were declared to be illegal by the High Court in November 2020, but a government appeal in that case is still pending.

Since 2019, the directives devastated Mombasa’s economy, which relied heavily on the port. With cargo forced onto the SGR, thousands of truck owners and drivers lost their livelihoods since they were no longer needed to haul cargo. Hundreds of clearing and forwarding firms moved to Nairobi or closed shop. Local container freight stations were rendered useless. Tens of thousands of people working in truck dealerships, fuel service stations, mechanics, spare parts dealers, restaurants, informal sector kiosks, hawking, were effectively left jobless.

“Rescinding the SGR cargo directives is the only way to truly restore port services and livelihoods to Mombasa,” Mesh Abdul Razak of Fast Action Summit, an Okoa Mombasa member. “This would also greatly increase the Port’s competitiveness by giving importers more options for customs clearance and transport.”

“Bringing port services back to Mombasa will not destroy business at the inland container depots in Nairobi and Naivasha,” said Dennis Ombok, a logistics consultant and member of Okoa Mombasa. “Nairobi and Naivasha will still get cargo. “We are simply demanding freedom in how we do business. Cargo owners should be able to choose two things: the customs area to clear their goods and the mode of transport. Currently they can’t choose either.”

Okoa Mombasa also called upon President Ruto to obey an outstanding court order requiring the government to publicly release all contracts and agreements related to the SGR’s planning, construction and operations. Okoa Mombasa members won that court order in 2021, but the former government appealed.

The KES 450 billion (USD 4.2 billion) SGR is the most expensive infrastructure project in Kenya’s history and was financed mostly via loans through the Export-Import Bank of China. Despite this, key information about the project has never been made public. President Kenyatta promised to release the contracts in 2018, but failed to fulfill his pledge. 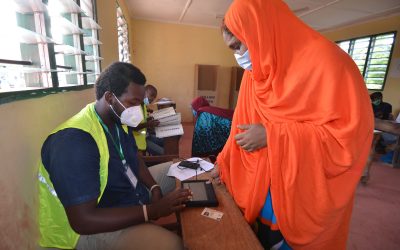